A discussion of FeLV testing protocol.

In August 2015, Calvin’s Paws received a request for help for a cat that was positive for Feline Leukemia. The couple that found him owned a barn, and had spayed and neutered a number of cats that had found their way on to their property over the years, but when this cat was neutered, he tested positive for FeLV. The only place they had to keep him separate from their other outdoor cats was a cage in their garage, so I contacted them and asked what kind of testing had been done to try and determine if the cat was truly positive or if he needed to be retested. I was assured that their vet had sent off blood to a lab and that the lab had confirmed that he was FeLV+, but the finders couldn’t remember the name of the tests that were done. I assumed that it was an IFA test, and agreed to take the cat with the understanding that I would be able to get the records from their vet and figure out what kind of tests were done (because if you haven’t figured it out by now, I’m a little obsessive about testing).

The finders brought the cat to me – a STUNNING Chocolate Point Siamese boy named Clyde. I hoped that since he was so beautiful, he would draw people’s attention, and at least give me an opportunity to educate people about FeLV. He was scared at first, but we got him settled in to our FeLV+ foster room, and the finder left.

Since I had some of his medical records, I decided to take a look and see what needed to be done with him (I knew he had been neutered, tested, and had his rabies vaccine, but nothing else). As soon as I looked at his records, I knew I needed to retest him right away before leaving him in my FeLV room. The vet’s office had performed an IDEXX Triple Test, which tests for FIV, FeLV, and Heartworms, and is notorious for having a high false positive rate. Even if it wasn’t a false positive at the time, it had been about 4 weeks since his initial test, so it was time for him to be retested again anyway. Being the medical coordinator for Calvin’s Paws, I had a couple different kinds of test kits on hand, and I immediately retested him using the IDEXX Combo Test (which only tests for FIV and FeLV) and the new Zoetis Witness FIV/FeLV test. I have to say – those 10 minutes waiting for the tests to finish running were some of the longest minutes ever (probably because I stood and watched them run…), but at the end of 10 minutes, the results agreed: Clyde was now NEGATIVE on both tests!

I separated Clyde from my other FeLV+ cats, not wanting to potentially expose him to the virus if he wasn’t actually infected. The next day, I called the vet that had done his original tests, and talked about his case. The vet told me that she had run two tests – a Triple Test on whole blood, and another test on serum. When the results disagreed (the triple test was positive, but the serum test was negative), she sent a sample off to IDEXX’s lab. The vet wasn’t sure what kind of tests had been done at the lab – she only knew that the lab had tested the samples and told her that he was “definitely positive.” She promised to get the records from IDEXX and fax them to me, but I could guess what they would say. IDEXX has a habit of telling vets that if a cat is positive on one of their tests, then the cat is persistently infected and would remain positive (which is simply not true).

Sure enough, when I got the IDEXX records, they showed that the lab had simply re-run the exact same tests that the vet had performed in her office. The results agreed this time, and so the lab said he was positive and the vet took their word for it, and no further testing was done.

I immediately made an appointment with our vet, who drew blood and sent it off for an IFA test. When the IFA came back, it confirmed what our tests had already told us – that Clyde was now negative for FeLV! By this time, being the stunning Siamese boy that he is, he already had an adopter lined up, and was adopted a week later.

Clyde’s story is not an uncommon one. We’ve had a number of cats over the years that initially test positive for FeLV, only to test negative within a month or two. This is why Calvin’s Paws now has a rather detailed testing protocol: every cat that comes to us is tested individually, any cat that tests positive for FeLV has blood sent off for an IFA test to confirm infection, and if the IFA is negative (which happens a lot actually!) the cat is retested a month later. Usually within two months, the results of the tests will agree, and you can confirm if the cat is positive or negative. Side note – we do have a cat in our program, Ice Dream, who has been with us for about 8 years and who has consistently tests positive on in house tests, but negative on the IFA test; but she’s the exception rather than the rule.

So why might a cat test positive on one test and not another? Well, there are a few reasons.

The fact is, the rate of FeLV infection has been greatly reduced over the last 30 years, and many vets don’t have a lot of experience with cats testing positive. Combine this with the fact that the maker of the tests likes to tell vets that their tests are the end-all-be-all of testing, and you end up with cats that are wrongly diagnosed with FeLV.

So what? Why does it matter?

Knowing a cat’s true infection status is so important for so many reasons. First, many shelters immediately euthanize any cat testing FeLV+ (based on one test on one day). Even a number of vets still recommend euthanasia to owners of cats that test positive! Clyde is lucky – lucky that he didn’t end up at a shelter, and lucky that his finders cared enough about him to try and find him a safe place to live out his life.

Even if a cat testing FeLV+ is lucky enough not to be immediately euthanized, they’re hard to adopt out. Many rescues do not accept FeLV+ cats into their program, both because of quarantine issues and the fact that FeLV+ cats are only rarely adopted. Many people don’t want to adopt a “sick” cat (more on why FeLV+ cats aren’t “sick” to come), either because they don’t want to risk any extra vet expenses or because they don’t want to get attached to a cat only to have it die after a year. Not all people get to see what I see – that the FeLV+ cats are some of the absolute sweetest, gentlest cats you’ll ever meet. They are so loving, and so grateful to be safe and cared for. Yes, they can get sick and die, and when that happens it just about kills you, but that is true for any other cat. Yes, they might have a shortened lifespan, but they might still live for years. Look at our girl Ice Dream – 10 years old and one of the happiest cats I’ve ever met! Mikael – DOUBLE positive (he has FIV and FeLV) and strong as an ox at 4 years old! I for one won’t live my life based on “maybes” and “what ifs” – these cats are amazing and they all deserve a loving forever home just as much as any other cat.

So spread the word – FeLV+ cats are totally awesome, but be sure to test and retest before slapping the FeLV diagnosis on a cat! 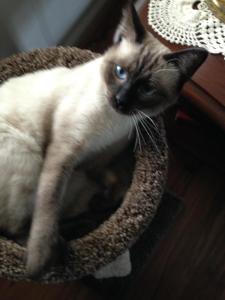 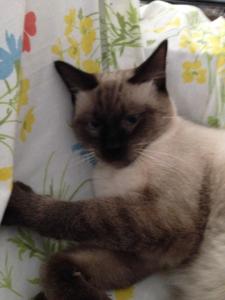 Calvin’s Paws is a 501(c)(3) rescue. We work through a network of foster homes throughout the Triangle area to save homeless cats and dogs. We are a dedicated group of volunteers with common goals: rescuing animals (both positives and non-infected felines), finding the best fitting homes for each animal, and educating the public on animal health and responsible pet ownership.
www.calvinspaws.com